A different type of craft

A family holiday in the south of France offered the opportunity to try paddle a different craft from the usual sea kayaks and it was amazing how easy it was to organize.  We arrived at the Club de Canoe Kayak at Aubeterre sur Dronne and within minutes 11 of us were being whisked upstream in two mini buses with 5 open canoes and crews whose ages ranged from 8 years of age to 85.
We completed a journey of just over 5 kilometres in a little over 2 hours.  It was just so simple to arrange and good value, it made me think how much more complex the arrangements would have been to get a similar group on the water in the UK. Perhaps we have a lot to learn from the French and interestingly about 75 per cent of the groups that we saw around the centre and preparing to paddle were from the UK. 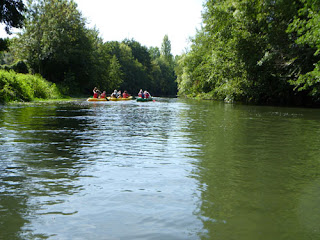 The river was pretty gentle meandering through a rural landscape and apart from 2 fishermen and another family of English canoeists we had the river to ourselves. 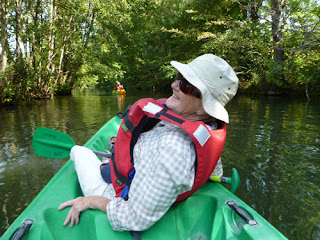 Age is no barrier to enjoying being on the water. 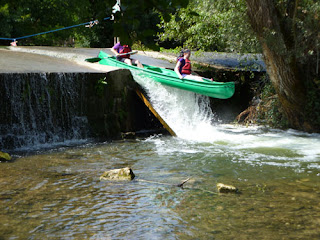 Taking the canoe shoot was much easier than the portage route although for some of the group it was more exciting than they anticipated. 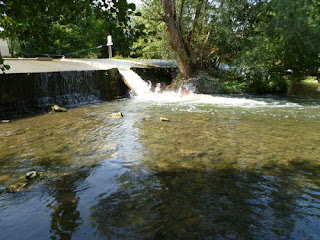 If the weight distribution in the canoe wasn't quite right then it was easy to fill the craft with significant amounts of water.
This is the oldest member of the team going over the fall.

Posted by Kevin Mansell at 9:35 pm No comments: 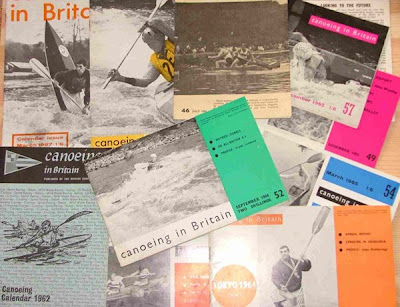 I have recently managed to purchase 12 issues of “Canoeing in Britain” which was the British Canoe Union magazine, from between April 1962 and March 1967 plus 6 issues of “Canoeing” from between January 1962 and January 1963 from e bay. These are a few gems which help to illustrate the state of sea kayaking in Britain in the early 1960’s.
The September 1964 edition contained some interesting local information for Jersey, the small island where I live. In 1964 there were 6 qualified canoe coaches living on the island, whilst at the same time there were only 5 coaches in Scotland. How things have changed in the intervening years.
Surf kayaking was clearly developing, largely due to the efforts of Oliver Cock, with his annual surf weeks in Bude. The December 1964 edition contained warnings of possible future problems with Wadebridge Council in Cornwall asking canoeists to avoid Polzeath during August because it is too crowded. June 1965 saw the publication of a supplement to the surf beaches of England and Wales. 30 different breaks were described but Bude and Scarborough were obvious omissions.
One name which occurred on a regular basis was Chris Hare, which is hardly surprising as he was involved in the production of the magazine for a number of years. In the December 1964 he reviews the “Clyde Special” sea kayak. He describes it as “A first class attempt to make a sea boat that combines Eskimo qualities with adequate stowing space for sea touring.” At 17 feet 6 inches long and a 20 inch beam it was good value at £28!
The double version of this kayak was used in a significant journey which was described in the September 1965 edition;

“In June this year, Scottish canoeists Hamish Gow and his wife Anne, made the first crossing from North Uist to St Kilda, some 54 miles out into the Atlantic. Using a Clyde double fitted with a sail, they took 14 hours to reach Boreray, a cliff bound island where it was impossible to land. Because of fog and approaching night, they decided to shelter off the 1,000 foot cliffs until morning. Anne slept in her sleeping bag while Hamish kept the canoe upright, but at midnight Hirta became visible, and they set off to paddle the remaining 5 miles, arriving at 2 a.m. Congratulations on a fine achievement.”

Those few lines describe one of the finest sea kayaking trips of recent years.

Chris Hare continued to maintain a position at the forefront of sea kayaking. His description of a trip along the Northumberland coast in 1965 contains the first mention of a paddler who was to have a significant impact on sea kayaking throughout the world, a certain Derek Hutchinson.
Chris Hare also paddled on the west coast of Greenland although this trip was not without its controversy. In the June 1966 Canoeing in Britain he states one of his objectives on his return was to set up British seal hunting groups working around the coasts of Britain using the knowledge and techniques gathered at Igdlorssuit. His article concludes “So if any reader fancies a crack at seal hunting or any other kind of kayak hunting off the west coast of Scotland …..” This particular article not surprisingly, generated a heated response.
The issue of the magazine also contained information that a certain Frank Goodman had just passed his BCU Senior Instructor award. This was the original Level 3 Coach.
What is interesting is how many names that are well known in sea kayaking circles first came to prominence in the 1960’s. Derek Hutchinson and Frank Goodman have already been mentioned but Alistair Wilson, of Lendal paddles, was very active in the racing scene including the 1964 Olympics. Duncan Winning, who was at last year’s Jersey Sea Kayak Symposium was already involved in the administration of the sport as well as being involved in slaloms in the early 1960’s and contributing letters on kayak design.

Keep an eye open on e bay for other historical documents. They make fascinating reading.
Posted by Kevin Mansell at 1:36 pm No comments:

Sark and Mr Pye
Mervyn Peake is probably best known for his Gormenghast Trilogy of books but he also wrote Mr Pye, which is set on the Isle of Sark. It was turned in a mini series for TV in 1986 with Derek Jacobi in the lead role. In one memorable section Miss George is lowered into the Creux but the planned picnic was ruined by the arrival of a badly decomposed whale.
There were no sea mammals to distract us and it was too early for our picnic, as we entered the bay, but Derrible Bay is a great place to explore, either by kayak or on foot.
Mr Pye was first published in 1953 and in the subsequent half century plus this quiet corner on the east coast of Sark has remained virtually unchanged and as we explored the bay on a warm July Sunday morning it was possible to imagine the events unfolding, as described in the book.
For the sea kayaker interested in literature Sark has other connections including the Victor Hugo cave on the west side of the island. 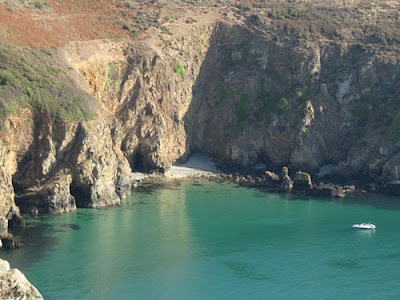 Derrible Bay, viewed from above. The Creux is on the left hand side of the photograph. Chris crossing Derrible Bay, whilst undertaking a circumnavigation of the island. 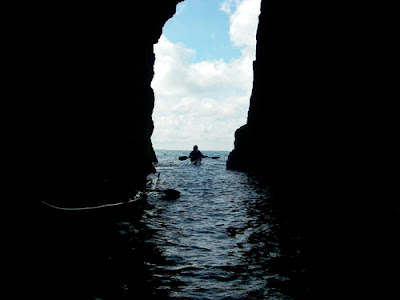 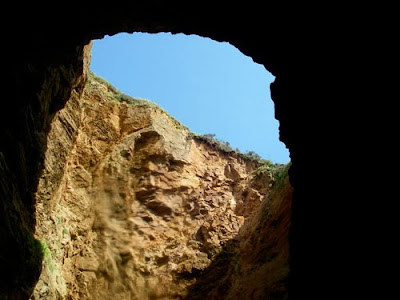 Looking up the Creux. 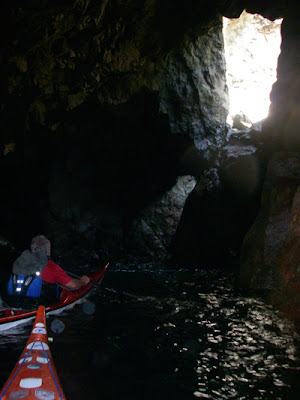 The Victor Hugo Cave on the west coast of Sark. 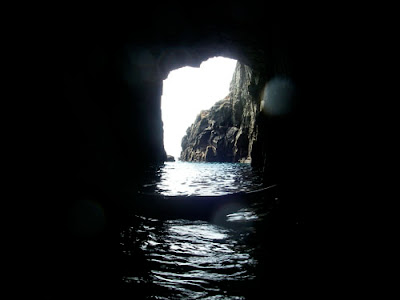 Looking out towards the entrance of the Victor Hugo Cave.
Posted by Kevin Mansell at 1:31 pm No comments:

Tidal diamonds are invaluable sources of information in relation to the speed and direction of tidal streams.  Whilst away on a paddling trip recently I came across, what must be an almost unique diamond?  It is diamond C on Admiralty Chart 808, East Guernsey, Herm and Sark.

The first observation is that the streams only flow in two directions, exactly opposite each other.  The tide is flowing approximately SSW and then it changes abruptly and goes NNE.  An exact 180° change.
Something else to note is that maximum rate occurs at high and low water, with slack, if it can be called that, occurring at mid tide.  Many a sea paddler or other water user has been caught unawares because they assume that maximum rate must occur at mid tide and have set out on what they thought was high water slack.
The advice is to always double check your data and to keep your eyes open for interesting and possibly unique items of information as shown by this tidal diamond. 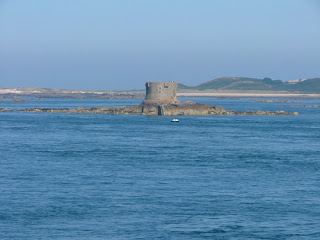 Brehon Tower in the Little Russel with Herm Island behind.  The tidal diamond is located just to the left of the tower.
Posted by Kevin Mansell at 9:15 pm No comments: