For a number of years the old beach cafe at Portelet gradually crumbled through disuse, it's decline seemingly linked to the closure of the holiday camp, which used to dominate the cliff top above and the associated drop in the number of visitors to the beach.
This year has seen the refurbishment of the building and its reopening as a pizza place and the Jersey Canoe Club decided to visit the Portelet Bay Cafe for lunch on the last day of August.  A paddle from Ouaisne allowed us to visit some of the historical sites, which exist along this section of coast.
This was followed by a very pleasant break at Portelet Bay Cafe, the pizzas are highly recommended, and the paddle back assisting with their digestion.  Considering it was a rather grey day with an increasing north westerly wind we think we made pretty good use of the time. 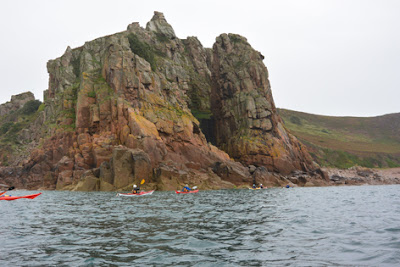 Leaving from Ouaisne is always fascinating as we pass close to La Cotte de St Brelade, which is one of the most important neanderthal sites in north west Europe.  Within the ice age sediments there are thousands of stone tools in addition to the bones of their prey. 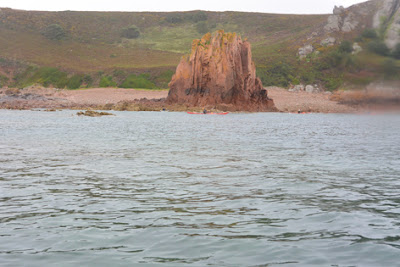 To the south lies the small stack of La Cotte Island, which has a number of short climbs on its west face. 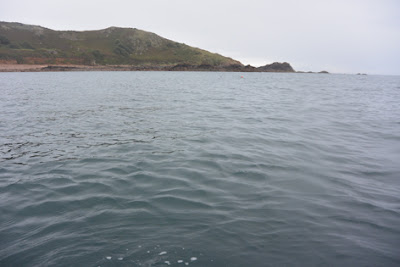 The first major headland is Pt Le Fret.  It is fully exposed to the Atlantic swell but today it was all calm and we able to thread our way through the gullies.  Earlier this year the swell so large that we had to keep about 200 metres out, when rounding the point. 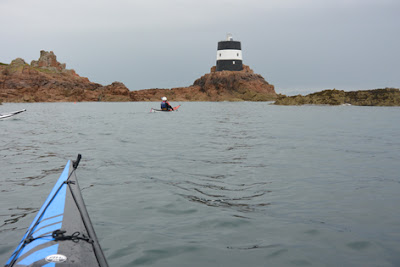 Noirmont Tower was completed in 1814 to help protect the southern coast of the island from potential invasion by the French.  Today the lighthouse marks the western approach to St Helier. 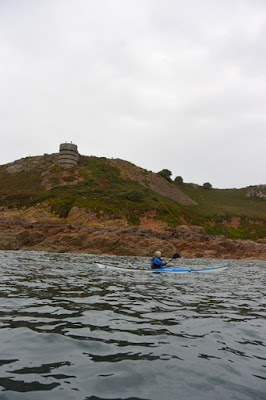 Nicky passing in front of Batterie Lothringen, part of a World War 2 coastal battery.  The first part was completed in 1941 but this tower was built April and October 1943. 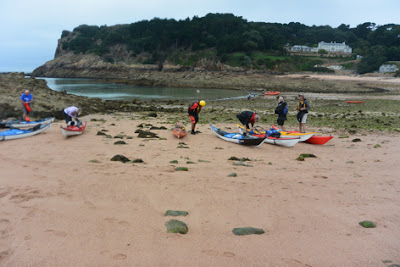 On the beach at Portelet, after our pizza's.  Today was a particularly large spring tide, when we had landed less than 2 hours before, we left our kayaks at the waters edge. 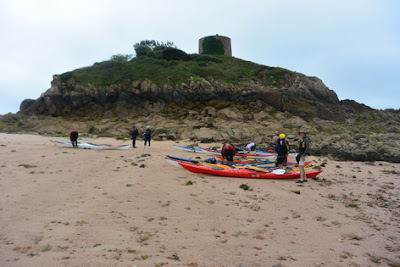 Another Jersey round tower, it was completed 6 years earlier than the nearby one at Noirmont, in 1806.  A sergeant and 12 soldiers manned the tower, it must have been rather crowded.
Posted by Kevin Mansell at 7:36 pm No comments:

To the north east of Jersey there are two reefs, Les Ecrehous and Les Dirouilles.  Without doubt the most popular area of this Ramsar site is Les Ecrehous but today our destination was Les Dirouilles.
It was a large Spring Tide and although the tidal streams were running with significant energy we were able to use some of the speed to our advantage.  It was at times like this that confidence in the GPS is important, monitoring our drift and fine tuning of our bearing ensured that we weren't swept past the rocks.
Very little has been written about the reef but it is known that in 1816 40 people were drowned when a ship, La Balance, which was sailing from St Malo to Canada struck the reef.  It must have been in totally different conditions to those we experienced on the reef today.
The calm waters, fast moving streams and lack of any other people combined to produce a truly memorable day. 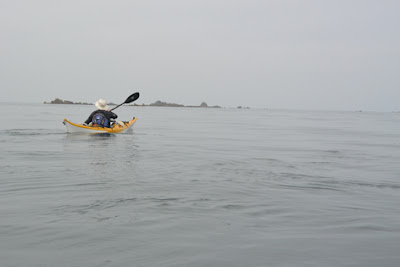 Approaching Les Dirouilles.  When we left Jersey the tidal streams were running at over 4 knots, fortunately they were mainly in our favour. 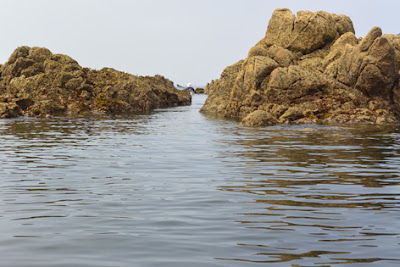 Pete is just visible threading his way through one of the numerous channels. 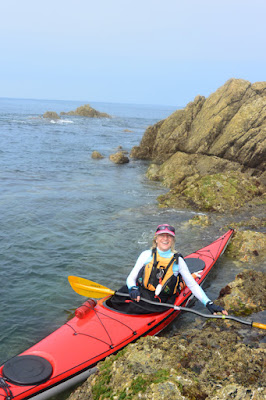 Janet with a rather large smile, after a superb crossing from Jersey. 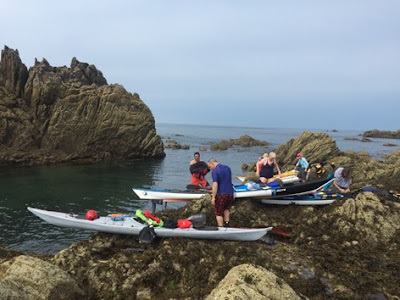 Landing wasn't straightforward but it was a great place to swim. 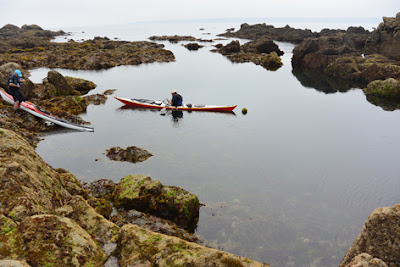 A very sheltered pool!  There can't be many days like this at Les Dirouilles. 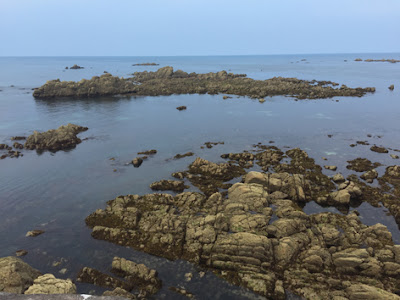 Looking north across the reef.  Next stop Alderney, about 30 miles away. 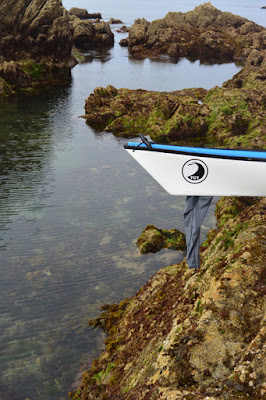 Although we were on the reef for only about an hour, the tide had dropped over a metre, and this wasn't at the time of maximum change.  The tidal range today was 11 metres. 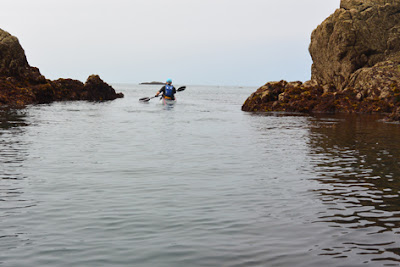 Time to hitch a ride on the flooding tide back to St Catherine's.  At times our speed over the ground was over 7 knots.  The joy of a free ride!
Posted by Kevin Mansell at 9:38 pm No comments:

It has been a while so I posted on the site, the aim of a photograph everyday, went out the window due to changing personal circumstances, but it is probably an opportune time to start to post again.
Today's paddle was to the Paternosters, a reef off the north west coast of Jersey, which is rarely visited by by other boat owners, as landing would be almost impossible.
On today's large spring tide there was a significant amount of exposed rock but Tuesday mornings tide is another 0.6 metre lower, with an 03:27 low water,  I think its true to say though nobody will be on the reef to witness it how much more is exposed.
For us though, it was a great couple of hours on the water. 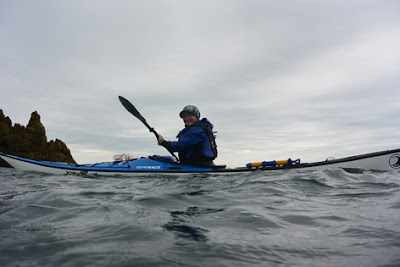 Nicky arriving at the Paternosters.  Heading west from Bonne Nuit we made full use of the ebbing spring tide, most of the time we were averaging about 6 knots. 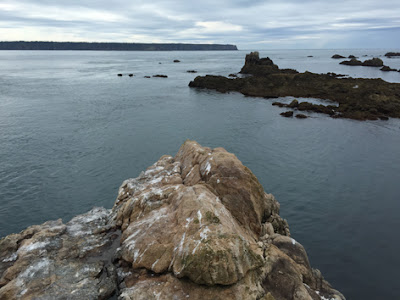 Looking back towards the north west corner of Jersey.  Standing here is probably one of the most isolated locations in the Baliwick of Jersey 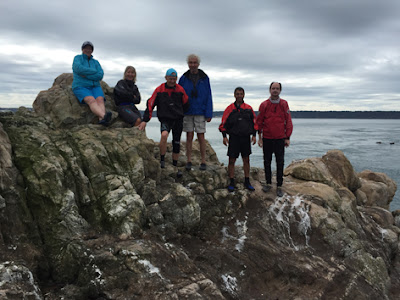 A merry band of paddlers.  For a couple of the group it was their first visit to this reef off the north coast of Jersey. 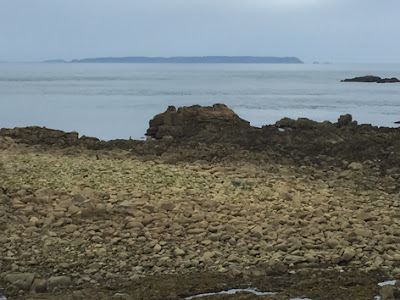 Looking north towards Sark, an excellent paddling destination in its own right. 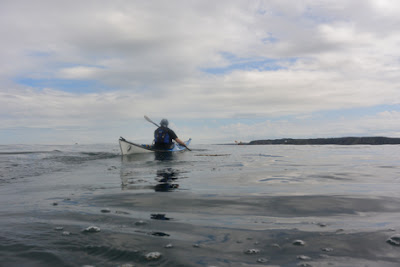 Leaving the reef towards the north coast of Jersey 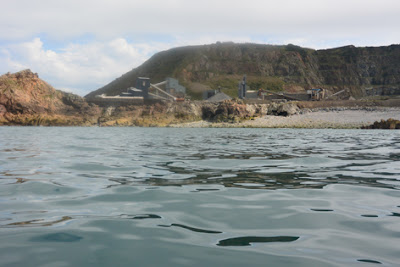 This isn't an image to show that industry occurs around the coast of but rather the scene of environmental success.  In the sheds of the quarry a pair of chough's bred, for the first time in Jersey for approximately 100 years.  Sadly we didn't see them today.
Posted by Kevin Mansell at 10:58 pm No comments: