Thursday evenings during the winter months are the regular pool sessions, apart from one week in March when it is the local Swimmarathon.  A huge community fund raising event so we normally have a week without midweek paddling but last nights forecast raised the possibility of a night paddle out from Belcroute Bay.
Belcroute is a perfect place for a night paddle, sheltered from the prevailing wind and swell and out of the strongest tidal streams, but with plenty to explore including St Aubin's Harbour a few hundred metres to the north.  There are also plenty of navigation markers in the vicinity if you wish to improve the accuracy of your bearings and timings.
We met at Belcroute at just before 7.00 pm and it was clear that the major issue was how we were going to launch.  The 11.8 metre tide meant that the sea was pretty close to the wall and there was the occasional larger swell.  In a plastic sea kayak launching down the slip was a distinct possibility, particularly with assistance.  Launching with a fibre glass kayak was an entirely different proposition, the best option for preserving kit appeared to be to throw the kayak into the sea, jump in after it, hopefully timing your entry into the water so that the retreating swell sucked you away from the slip and then perform a self rescue, all in the dark.  Although there was some initial reluctance regarding the assessment of the situation everybody managed to perform the task without any major drama.
Once afloat we had a delightful paddle around St Aubin's Fort, built during the English Civil War and extended in the 18th and 20th Century it now serves as an outdoor centre for the Education Department.  From there we headed across to St Aubin's Harbour, which thrived as Jersey fishermen returned from the fishing grounds off eastern Canada. The splendid merchants houses along the waterfront known as Cod houses.  A paddle around the harbour is always pleasant, particularly during the hours of darkness.
The return to Belcroute was simple and the landing at Belcroute was easier than anticipated as the tide had dropped slightly but it was still entertaining, having to time your arrival in the steep pebble beach with one of the smaller sets of waves, not always easy to achieve when you can't see what is coming.  A delightful way to spend a couple of hours on a mid-week evening in March. 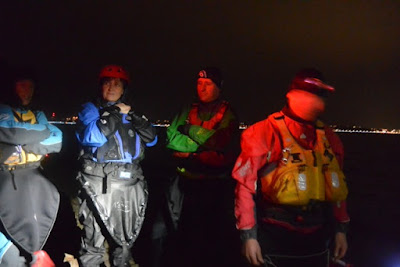 Listening to Derek's briefing whilst contemplating the upcoming swim. 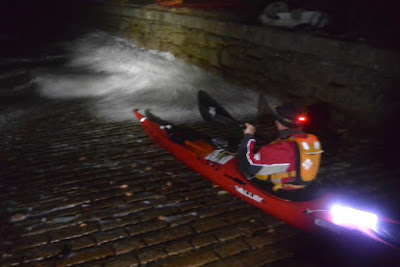 Plastic kayaks could be launched down the slip although timing was pretty important. 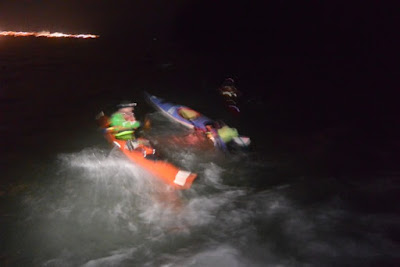 Ruth swimming for it with Alex ready to help. 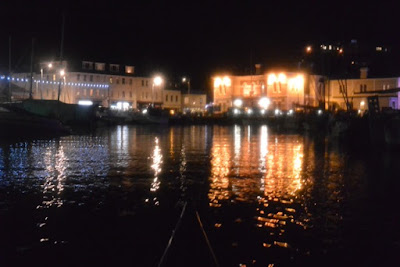 St Brelade's Parish hall, in a previous life it was part of the railway station. 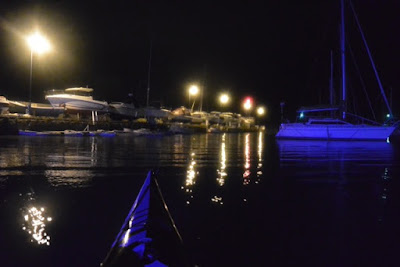 Heading back to the entrance. 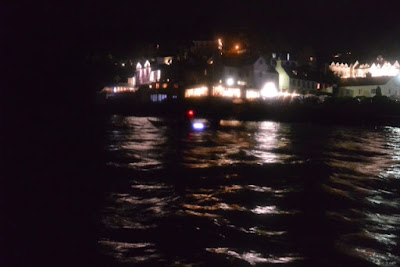 On the outside of the harbour, passing the Royal Channel Islands Yacht Club, as we head back towards Belcroute.
Posted by Kevin Mansell at 6:46 am